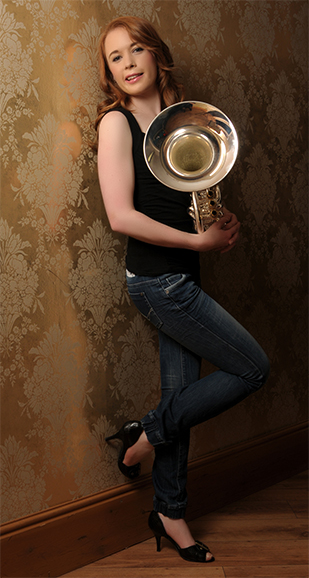 Kristy began playing the baritone at six years of age. In 1991, Kristy joined her community brass band, the Gunnedah Shire Band and is still a proud member of this band today. Kristy was initially taught by her father, Laurence Rowe, who in 2010 received an OAM for his contribution to music in Australia.

Kristy began to compete in solo competitions at a young age and has since won 28 State and National titles in Australia.

In 2004 Kristy won the Open Champion of Champions at the NSW State solos, following which she was invited to compete in the 2005 Ern Keller International Soloist of the Year competition. As winner of the Ern Keller, Kristy qualified for the final of the British Open Solo Championships held in November 2005. During her visit to the UK for this competition, Kristy attended championship section brass band rehearsals, various concerts and recitals, fuelling a desire to return to England in pursuit of her music ambition.

In 2008, Kristy did just that. Joining Leyland Band on 2nd baritone, she played alongside world-class baritone player, Katrina Marzella, amongst many other superb musicians and a very inspiring musical director, Jason Katsikaris. Kristy first met Jason when he began to conduct the Gunnedah Shire Band in 1999, introducing her to a new world of musical concepts. He has since become one of the leading brass band conductors in Australia and the United Kingdom.

Whilst based in the UK, Kristy really set her mark on the world stage of brass banding.

In 2009, Kristy was invited to play with Brassband Buizingen at the World Championships in Kerkrade (Netherlands), and she also competed in the British Open Solo Championships, winning the Margaret Mortimer Best Baritone/Euphonium prize and coming 3rd in the final round of the competition. Kristy was also promoted to solo baritone at Leyland in September that year, a position that she held for 2 years until her return to Australia.

2010 saw Kristy become a semi finalist in the European Soloist Competition in Linz, Austria, and later that year she was guest soloist with Brassband Rijnmond at the results Gala concert of the French Open Brass Band championships in Amboise. This was her first event as a Besson representative Artist. She also won the prize of best Baritone/Tenor Horn at the “Brass in Concert” Championships, November 2010.

In July 2011 Kristy completed her Post Graduate Diploma in Solo Performance at the Royal Northern College of Music in Manchester, graduating with Distinction under the tutelage of world famous euphonium virtuoso, Steven Mead. 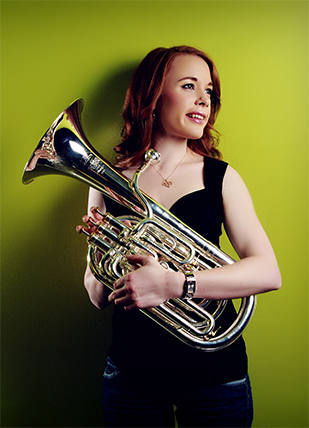 Kristy returned to Australia in September 2011, where she has continued her musical success, winning the Best Soloist Prize during the FABB Australasian Open Festival in October 2011 after premiering When Sparks Fly by Tom Davoren, and the Open Baritone title at the 2012 Australian Championships.

Kristy’s debut solo CD, entitled Romanze, was released at the 2012 ITEC in Linz, Austria, where she featured as a guest Artist. Her sheet music album of the same name was also released at this conference. It was during ITEC 2012 that Kristy gave the world premiere of Mayfly Blues during a baritone spotlight with fellow baritone artist Katrina Marzella, and the world premiere of The Healing Power of Flame with Brass Band Oberösterreich in the Final Gala Concert. Both of these new works were composed for Kristy’s latest CD, Center Stage.