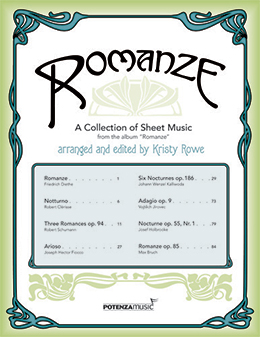 Romanze: A Collection of Sheet Music

This album is the complete collection of solos and piano accompaniments from my Romanze CD. The solos are tailored with range options to suit both 3- and 4-valved instruments.

The idea of creating a baritone album of romantic pieces came about in 2011 while studying at the Royal Northern College of Music (RNCM). I found the Schumann Romances in a pile of old music in the RNCM library during my first week of studies. A few months later I prepared them for a lesson with my mentor, Steven Mead and he immediately realized the suitability of this genre of music for the Baritone. It was this inspiration that ignited the idea of creating an album of romantic pieces for the baritone. While some changes were necessary in the process of making the pieces “baritone friendly”, I have tried to stay as true to the original composers’ intent as possible. I have always been drawn to Romantic music and the musical freedom that it encourages. I hope others find the same sense of enjoyment from playing or listening to this music.